TEST OF TIME – Hauling fertilizer is harsh. So when Greg Markarian needed trailers that can hold up, he turned to Trinity.

At just age 21, the third-generation farmer purchased his first Trinity trailer to haul his own family’s crops, mostly almonds, citrus, cherries, and grapes. But before long, word got out among his neighbors that Greg was hauling. They asked him for help and Greg Markarian Enterprises was born. More than 35 years later, Markarian’s company has grown to a fleet of 12 trailers — all Trinity — specializing in fertilizer hauling, spreading and sales.

Fertilizers, with their many corrosive ingredients, including sulfur, are much harsher than the commodities Greg was used to hauling.

“Sulfur, the dry form of sulfuric acid, is really hard on the trailers,” Greg explains.

The simple fact is aluminium and carbon steel trailers can’t hold up to these corrosive loads. When they try, they require detailed clean outs after every load, driving costs up and profits down. Even then, the harsh ingredients of fertilizers dramatically shorten most trailer’s lifespans. “The stainless steel trailers from Trinity are essential for hauling sulfur because they can handle the harsh nature of the product, especially over time,” he says, explaining that even when he finally got around to selling his original 1981 Trinity, it was still running strong after thousands of loads. (He only sold it so he could upgrade to a Trinity trailer with the new hydraulic system.)

Trinity’s stainless steel also perfectly pairs with the company’s unique bridge design to create the most lightweight trailer in the industry — without sacrificing strength. For Greg Markarian Enterprises, this means they can haul more product per load by pulling a Trinity. Taken together, Greg appreciates that he can get a trailer that can haul maximum payload every day, for decades. “Other companies also sell lighter-weight trailers, but they just don’t hold up,” Greg says.

For his most recent Trinity purchase, Greg even worked with the Trinity team to substitute a few key parts with brands always readily available in the Central Valley. That way, if something goes awry, he can rest comfortably knowing the parts can be obtained locally.

In the end, it all comes down to simple math.

Given the significant investment any trailer requires, it only makes sense, according to Greg, to choose trailers — and a company — that solve your real-world challenges. Can it handle a variety of jobs and loads? Will it stand the test of time? Is the manufacturer willing to customize it to your needs?

After four decades of putting them to the test, Greg says Trinity trailers check all the boxes. “They’re worth it.” 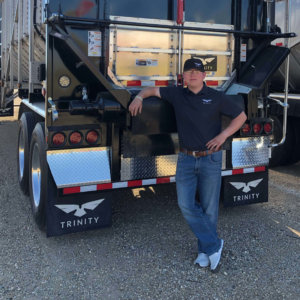 David grew up on a cattle, hog, and row crop farm in Sparta, Illinois and spent his time either working on the farm or playing sports. Today, he lives in Knoxville, Tennessee with his wife of nearly 30 years and their two sons. David covers Trinity’s southeast states.

David loves watching his sons compete in sports — one is a college golfer, while the other plays college baseball. He also moonlights as a NCAA softball umpire — a role he’s served for the last 25 years. 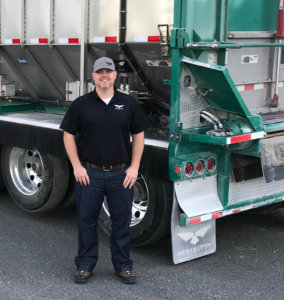 Rich grew up on a farm in Othello, a small farming town in Washington where he learned to hunt and fish with his dad and brothers. In one way or another, he’s been around agriculture all his life and enjoys being immersed in its culture. After graduation, Rich worked in agricultural sales for a John Deere dealership, selling ag equipment ranging from small tractors to large combines.

Rich lives in Pasco, Washington has been with the Trinity team for more than 3 years covering the Washington, Oregon, and Alaska territories, as well as the Canadian territories of BC, Alberta and Saskatchewan. He loves being outdoors and spending time with his wife of 20+ years and their 3 beautiful children. 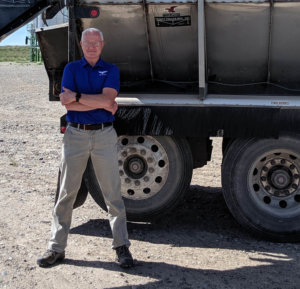 Corey covers the Idaho, Montana and Wyoming territories for Trinity. Born in Cache Valley, Utah, Corey grew up on a Southern Idaho farm. Now living in Rupert, Idaho, Corey has a lifetime of experience growing and transporting agricultural commodities. He’s worked as a transportation analyst and has owned and operated trucks and trailers for many years. His experience on that side of the industry helps him understand the hard work and dedication it takes to make an operation successful. He’s proud to serve the men and women that transport our state’s products.

Corey married his highschool sweetheart and they love riding their dirt bikes and golfing together. They enjoy spending time with their five children and all their grandchildren whenever they can. Chad has been with the Trinity team for the past 6 years. For the past 5 ½ years, he’s been selling parts to customers across the Trinity footprint, including international sales. Recently, Chad has been leading a new project, building Trinity’s used equipment program to customers who are not quite ready for a new rig. If you’ve got questions on used equipment, call Chad at 208-781-2959 and he’d love to share what we have available. In his free time, he loves to cook, golf, ride motorcycles and explore Idaho. But his favorite moments are those spent with his daughter. Keith is a go-to individual for information about Trinity trailers. His journey at Trinity has taken him through nearly every department — allowing him to understand the trailers inside and out. Knowing exactly how Trinity trailers can best benefit haulers, Keith works closely with his team to help them build deep relationships with the customers in their territories.

In his free time, Keith is passionate about travel with his wife and together, they enjoy the many great treasures of living in Idaho. Jason truly understands all aspects of sales. He gained experience as an independent contractor and then spent 14 years with Pepsico — moving through the ranks to become a senior sales manager for the company.

Jason is a car enthusiast and passionate about high-end audio equipment. He enjoys exploring all that Idaho has to offer with his family

Before joining the Trinity team, Natalie Shores spent most of her career supporting start-up teams and growing companies. In her role as controller, Natalie will help manage the finance and accounting teams at Trinity’s Boise, Idaho headquarters. Previously, Natalie worked at VersaBuilt where she managed the finance at administrative functions of the robotics company. Natalie has also worked with other tech companies including WhiteCloud Analytics, CradlePoint, Microsoft and ProClarity Corporation.

Natalie earned a BBA, Accountancy, at Boise State University and also holds an MBA degree. Natalie is passionate about the Trinity culture and helping team members grow their mastery and leadership skills. Outside of work, Natalie enjoys serving youth organizations such as the Boy Scouts, High school marching and pep band, and the Children’s Home Society. She also enjoys puzzling, reading – currently historical fiction, and walking with her kids and dogs. Dirk joined Trinity after spending many years in senior management roles across the United States. His experience and success in defining, developing, and executing comprehensive strategies to achieve extraordinary results are core to the Trinity sales team. His passion is developing strong, cohesive teams comprised of customer focused individuals.

Dirk brings this experience to the Trinity leadership team and is responsible for managing the sales teams, dealer partners and launch of new products.

When not working with the Trinity team to help his team exceed the customers’ expectations, Dirk enjoys travel with his wife and is an avid scuba diver and mediocre golfer. 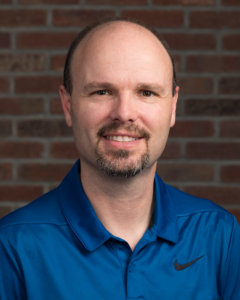 John Raff was looking to forge ahead in his career with more than a decade of experience at Motive Power and Rhino Metals, Inc. under his belt. When the head engineering position opened at Trinity, John knew he was ready for the challenge. Since taking on the position, he’s been dedicated to streamlining designs and pushing his team beyond the status quo. Everything he does goes into helping Trinity engineer the toughest trailers on Earth.

John — a Colorado native — is an active outdoorsman. You’ll often find him hitting the slopes or camping out in Idaho’s wilderness. When he’s not working at Trinity or building his own home, John and his fantastic wife love traveling with their three children. 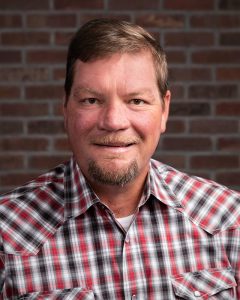 Brant Schorr joined the Trinity team with the official title of customer care manager. But really, he's Trinity's in-house detective. When a call comes in -- whether a problem or a special request -- Brant starts looking for an answer. Sometimes, that means means he's digging through old manuals to find a solution to a problem your used trailer may be having. Sometimes, it's just talking with you about an idea for a new enhancement for one of the belt trailers.

When not finding answers at Trinity, you'll find Brant living an idyllic Idaho life -- hunting, fishing and golfing in this incredible state. After you get to know him a little better, be sure to ask him for a story or two about his experiences -- the best ones are the ones he can't tell! Did you know there are over 10,000 touches made to at Trinity trailer during the build process? That means a lot of magic has to happen to keep things running smooth. That magic falls into the hands of Bud Condee, Trinity's production manager. Each day, Bud makes sure that each trailer is built and delivered on schedule, and ensures that every single bolt is tight, each weld is perfect, and every single element of the trailer is built to the high standards Trinity expects from our craftsmen.

As the saying goes, we work hard and play hard - and Bud does exactly that. When not in the office, you'll find him exploring the Idaho outdoors and enjoying time with his family. A manufacturing veteran, Dean honed his skills in a diverse range of industries, from aerospace to homebuilding. Today, as Trinity’s Engineering Manager, he directs the company’s design engineering, R&D, materials management functions and more. Every day, Dean's seven-person team of engineers, designers and support personnel work to ensure Trinity trailers meet — and exceed — customer expectations. Beyond work, Dean once spent a year sailing the Caribbean with his wife and son, and still dedicates much of his free time to his family and thinking of blue seas. Jason truly understands all aspects of sales, having a background as an independent operator and then working in a multi-national organization. He spent the last 14 years with Pepsico — moving through the ranks to become a senior sales manager for the company. After joining the Trinity team in February of 2018, Jason oversees all aspects of the company’s sales operation, including supervising the sales team, overseeing budgets, and making forecasts. He thrives on creating long-term relationships with hardworking customers, and delivering American-made products built by talented craftsmen.

When not selling Trinity trailers, Jason is a car enthusiast and is passionate about high-end audio equipment. He and his wife enjoy spending time with their young child while exploring all that Idaho has to offer. As Chief Financial Officer, Aaron puts his passion for numbers, process and planning to work making Trinity more efficient and effective for its customers. While the core of his role is the company’s finance and treasury management, his expertise is also used more broadly to manage human resources, IT, contract management and strategic planning. When not at work, Aaron enjoys spending time with his wife and three kids, volunteering with Junior Achievement and actively participating in the Treasure Valley CFO Forum, a local professional organization for financial executives. Aaron holds an MBA from Boise State University and a Bachelor's Degree in Accounting from Washington State University. You could say that Trinity is in Cameron’s blood. Having grown up around the company, Cameron worked in various capacities for Trinity over the years — including building and fabrication, manufacturing, and managing the finance, sales, and service departments. After taking some time to pursue other opportunities — including starting two CrossFit gyms — Cameron purchased Trinity and is now president of the company.

Sign up today for free and be the first to get notified on new updates.